9/11 The event took place at the auditorium of 411 CCHLA UFPB and started with the presentation of the IUF video, exposing the motives for the realization of the event in parallel to the IGF. Then remotely Pirate James in Rio de Janeiro, spoke about the violations and illegalities in the process of 23 political prisioners ‘#23PresosPolíticos’ – when it became apparent the tactics used by the State to silence and blame people after the June 2013 protest journeys. Right after the speech of James, anthropologist Gabriela Coleman gave a presentation regarding the benefits of anonymity in a democratic society. She also told us a bit about the history of Anonymous, especially in the United States, and about the arrests and persecutions that hacktivists faced in North America and Europe. Complemented by the fact that in Brazil, there are militants who had their personal secrecy and violated their privacy and were arrested and prosecuted only for managing one Anonymous Facebook page. The legal process aberrations can be analyzed now that the case files were publicized. After the presentation, there was room for questions, interventions and ended up experiencing a debate about privacy and anonymity on the Internet. 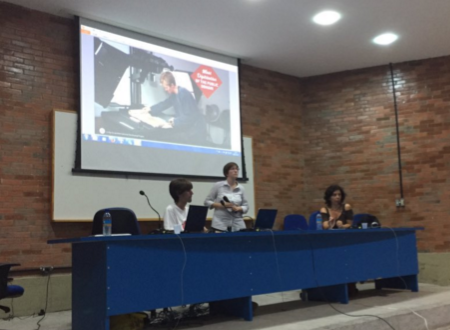 Finally, the MEP (Member of the European Parliament) Julia Reda closed the first day of the event, talking about his role in the European parliament. She acknowledged that her work on reform of copyright by the European Parliament displeased many pirates. However, she pointed out that legislative action is part of the pirate movement performance – and that stands out from the others by a globally active parties and activists. When asked by the audience whether the system is the main cause for the problems than would it not be more adequate a change in the consciousness of society rather than legislate? ‘. She said: “If you believe the system is corrupt in its entirety and nothing can be improved within it then it would not make sense to be in a party [even though a Pirate one].” 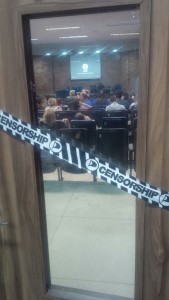 10/11 On Tuesday the Pirate Birgitta Jonsdotter, parliamentary Iceland and most likely person to take over as the next Prime Minister in the country. Birgitta spoke about a resolution of her own adopted at IPU (Inter-Parliamentary Union). The resolution calls on parliamentarians to strive for measures to protect whistleblowers calling for an end to censorship, online restrictions, monitoring or any type of repression against journalists. She Invited the parliamentarians of the IPU to support both the provision of government accounts and the private sector for human rights violations, such as the right to physical and psychological integrity, the right to privacy, freedom of speech and other individual freedoms. Such accountability are necessary because the principle of transparency must be established, since the understanding of this document, become lawful knowledge about: appropriate sanctions to ensure justice and to act as a deterrent, criminal cases, administrative fines, suspension or withdrawal of business licenses, and the payment of compensation to individuals for damage. The poet was not able to answer many questions due to her strict schedule, but blew a kiss and left wishes of love to all Pirates at the disgovernance Forum. After that the philosophy professor, Theo Oliveira of the Federal University of Paraíba – UFPB Campus IV, gave a presentation in defense of freedom of knowledge sharing through virtual networks and analyzed the need to reflect on the exposed issues the Pirate Party from a philosophical point of view. Listed the concepts of enlightenment definition (Aufklarung) Kant and the criticisms made by Adorno and Horkheimer, and also pointed out Habermas’s proposal of Communicative Action emphasizing the need for all the Pirates, reflecting a new form of social interaction and language through the virtual network . 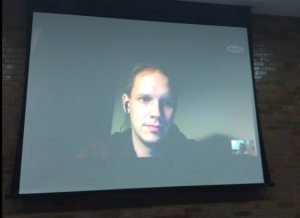 11/11 Peter Sunde, one of the founders of Pirate Bay (the most resilient torrent site in the world) would speak on the third day of the IUF, but due to technical reasons his presentation had to be canceled. The next presentation was a journalist and activist Adriano Belisario, Copyfight book organizer. Belisario began his speech, joking: “this is very formal disgovernance forum”! He decided to have a more informal talk rather than give a lecture in a formal manner. As an Old Pirate Party member, Belisario talked about Copyfight – a book which showed that the key issues involving copyright go far beyond the digital universe, “When someone like Peter Sunde is arrested, he is a famous figure and receives solidarity from around the world . But there is no difference between him and the ‘camelô’ (street sellers) suffering aggression in the streets of Rio de Janeiro. “ Following the inspiration of the Occupy protest under the slogan “We are the 99%” Belisario talked about a project under the name “Owners of Brazil.” Doing data analysis of large Brazilian companies, it sought to identify the “1%”. It found that just over 150 companies have 50% of the national GDP. These are the ones that receive more money from BNDES and also the ones that make more donations to political campaigns. The platform was developed in an open and all its documentation can be accessed at: proprietariosdobrasil.org.br/ 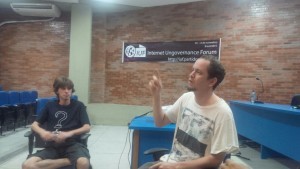 In Brazil we discuss the implementation of a standard digital radio signal. There are two models in dispute: the owner, limited and closed or an open source signal, such as digital radio mondiale. The spectrum is free to release and use of electro magnetic tracks, without prior licenses. This may represent a paradigm shift, a post-internet. You may also become a server, or a relay, not seen relays servers. Experiences with the ‘digital world radio’ transmitting voice and data between Amazonian tribes. In Mexico in a community it was tested an antenna that allowed a whole community to use their phones to communicate without the use of telecommunications companies without approval or help from governments. 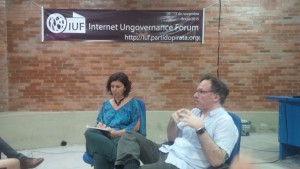 12/11 The IUF received Danny O’Brien, who is a international director at the EFF, Electronic Frontier Foundation, a nonprofit organization that fights mass surveillance and the fight for Internet privacy. Danny was in the same basement with Bram Cohen when the torrent was created. His stance at the time, represented a decisive revolution and a drastic change in the application and in the culture of sharing on the Internet. One of the most important points on the picked up information in conversation with Danny, was that at one point, when asked about the chances of paradigm shift on the control and vigilantism in information systems, he said that one does not necessarily need a complex structure to exit from the bonds of large corporations. What we need is to build new roads, through the free networks and organize actions financed independent policies of governments and companies, collaboratively (crowndfunding) in order to legally challenge unconstitutional laws and provide free access to knowledge for all those who want to learn about the knowledge sharing Danny O`brien also talked abou Bassel, a free software activist who has been arrested for three years in Siria and might be sentenced to death. He asked activists to press governments that still mantain contact with Assad Dictatorship like Brazil to ask Bassel to be forgiven At the end of his speech O’Brien and forum participants made a provocation that in Brazil, as in most of the world, we have shitty parties, shitty internet and shitty civilian organizations. ‘What do you have to lose ?’, he said.

Let us create Pirate Parties. Lets create Free Networks, Internet providers. We create organizations without ties to governments and corporations. We are free! What we have to lose?

An international news service for pirate parties. Covering the pirate movement and reports from around the world.